What does the way you walk say about you? To be honest, I have no idea what my walk says about me, but if a study was done on the way the three guys on the Triple Smoke bottle walked, I bet it would say that those guys are pretty cool dudes.

I’ll be honest; one of the reason’s I wanted to try this American Malt Whiskey was because of the bottle and the three cool dudes. Another reason, my favorite single malt whiskies are peat smoke Islay whiskies. Needless to say I wanted to compare the smoky scotch whiskies to this Triple Smoke. The finally reason was, I wanted to try it because I had heard so many good things about this American malt.

Finding this Triple Smoke took longer than I thought it would as all the places we kept visiting told me they didn’t carry it. We finally found it after a couple months of searching. Although Liquor Land near South Bay here in Boston didn’t carry the brand, they told us they would order a case for us to buy a bottle and for them to sell the rest. Thank you Liquor Land!

Triple Smoke is put out by the Corsair Distillery, which was established by childhood friends Darek Bell and Andrew Webber. The barley in Triple Smoke, is smoked three times hence the name. It is smoked by, Cherry Wood, Peat and Beechwood. This whiskey is pot stilled and then barreled in new Charred Oak barrels. Corsair has two facilities, one in Nashville, TN and the other in Bowling Green, KY.

BAD NEWS: It’s not as smoky as I thought it would be. The reason may be that I love those Islay whiskies a little too much, but I didn’t really get any smoke. There was absolutely no smoke comparison between this whiskey and the Islay Scotch whisky.

GOOD NEWS: Smoke or no smoke, who cares, its great whiskey. This American malt whiskey is flipping amazing!! I forgot all about the smoke after not being able to put the dram down. Let me be clear, the bottle we bought is nearly half gone. That’s how tasty this malt is!

Nose: cherry, vanilla and hints of smoke but I never get the smell of peat

Palate: cherry, cinnamon, vanilla and slight hints of peat bringing a nice balance to it.

Finish: a nice light and creamy dram. It is a fantastic everyday whiskey that you can just keep drinking.

I find it to be a very dangerous whiskey because we just kept drinking. It is really smooth, light and the best part, it is very affordable. We paid $52 for the bottle and yes it was certainly worth.

This American malt really surprised me not only in taste but also quality. There is complexity to this whiskey. It quickly became one of my new favorites and a whiskey I think I will continue to buy and have on my shelf. I think it also be a great gift for any whiskey lover.

It’s good American Whiskey for any type of whiskey drinker to include, non-whiskey drinkers. If you haven’t tried it then I certainly recommend you do. It’s tasty and affordable, but you do need to make sure you keep track of how many drams you drink, they do go down quick and smoothly. 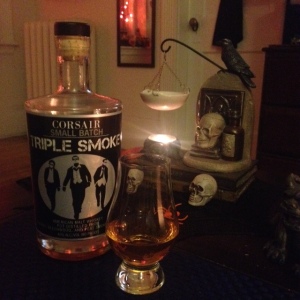