What’s unique about this whisky, aside from the barley being floor-malted, is the barely used to produce it. The whisky is made using Maris Otter Barley, which was popular at one time but stopped to be when other barley variations began to be used instead. It is winter barley and Glenmorangie is one of the select few to use it, which helps keep this barley alive.

This was my first time tasting anything under their private collection. Other than Tusail, I’ve also sampled, The Original, La Quinta Ruban and Lasanta. So far, Tusail is my favorite of the lot. I found this whisky not only to be unique but also, very tasty.

Tasting Notes
Nose: malt and toffee
Palate: it is sweet with notes of ginger, cinnamon and toffee
Finish: is smooth and full of spices

I know there are some people that stay away from no-age-statements but I did enjoy this one. It is a whisky that is balanced, sweet and different. I think it is also a whisky that non-whisky drinkers might enjoy. I wouldn’t go out to buy, as a bottle ranges about $120, but if offered to me I would not pass it up. 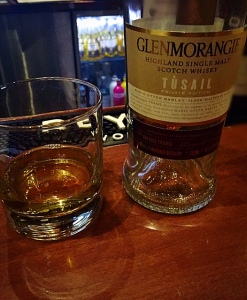