It’s Marathon Monday in Boston and the city is buzzing even though it’s a chilly rainy day. I do love seeing all the runners and the tourists in the city this time of year especially after what happened two years ago with the Boston Marathon bombing. Good luck to all the runners and if you need a dram to celebrate afterwards let me suggest a nice dram of Teeling Irish whiskey.

Honestly wrapping my head around this distilleries history took a little bit of research. After some internet sleuthing and reading an informative Bloomberg article, here is what I learned.

In 1782 Walter Teeling opened up the first Teeling distillery in Dublin, Ireland. After which he sold that distillery to the Jameson family. It was not till 1987 when John Teeling purchased a state owned distillery and a few dormant Irish whiskey brand names in the Cooley Peninsula. That’s when the distillery first opened its doors for business and began selling whiskies to supermarkets abroad, including Trader Joe’s here in the United States. A few years’ later Jim Beam wanted to add an Irish whiskey to its portfolio and approached John Teeling about selling the company. During negotiations his sons asked to make the sale on the condition that they could retain the name Teeling and 16,000 barrels of whiskey to start their own distillery.

The Teeling distillery will officially open its doors on May of this very year. It is the first distillery opening up in Dublin in 125 years. Although it’s doors have not officially opened the brothers got ahead of the maturation process by acquiring those 16,000 barrels of whiskey before officially selling to Beam.

I got the opportunity to taste the Teeling Small Batch whiskey, which spent about 6 months in rum casks and bottled in January 2014 at Citizens Public House and Oyster Bar here in Boston. My first thoughts, well I was a little speechless at the smoothness of the whiskey. It was delicious.

To be frank I was extremely surprised with this dram. For a young whiskey it was darn good. I enjoyed it and found it to be smoother than a lot of other Irish whiskies out there. Even with their distillery not officially open yet, they have done amazingly well with the product they are currently putting out. I’m very much looking forward to seeing what they are able to do with their distillery once up and running. If these products are good now I can only image they will be even better 5 years from now.

A bottle of this will cost you about $50 or so. I would definitely consider adding to my collection and do recommend trying. 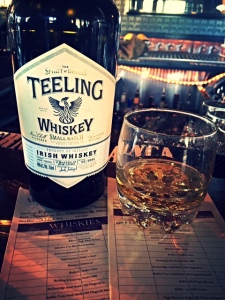 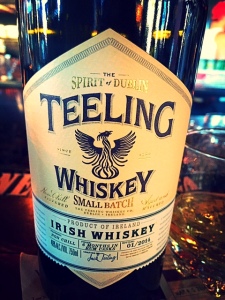