Of course when you think of whisky there is a chance that most of us think about Scotch and Irish whiskies. Aside from those and the American whiskies/bourbon, I thought the very same way. Japanese whisky was not in my radar till very recently. After having read about it in a magazine, I was certainly curious about it.

I’ve subsequently learned that Japan has been producing whisky for many, many years and also happens to be a huge whisky producer. Since the start of their whisky production, it wasn’t till very recent years, that they’ve come to light to the rest of the world.

Within the last few years not only has Japanese whiskies made their presence known in the whisky world, but they have also taken a good number of whisky awards in the process.

Hibiki, this particular whisky, is produced by Suntory Whisky which first established its whisky distillery in 1923. Hibiki in Japanese means echo, Suntory uses its synonym word resonance to describe its meaning. Its range features this 12 as well as a 17, 21 and 30 year old whisky. This 12 year old blended whisky has an ABV of 43% and if you were to purchase its price range is about $60-$70 depending on where you buy.

Color: Amber
Smell: very sweet
Taste: woodsy and strong with hints of sweetness. It finished with a slight burn

I’ll be honest before, tasting this whisky I was a bit skeptical. I had heard from others that it wasn’t very good, so I was going into the tasting with the idea in mind I that I too would not like it. To my surprise I was proven wrong. At first I did find it to be strong, but the more I tasted the more I liked it. It was different but it was a very well blended and balanced whisky.

I would definitely recommend trying especially if you wanted to explore something new. If not this product I’d certainly recommend checking out Japanese whisky. Since making their whisky presence known they definitely look like it’s here to stay. 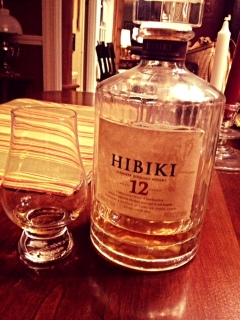