My first attraction to this whisky was the bottle and packaging. It was one of things that caught my eye when I walked by the aisle, along with having seen the name before in the 2013 program of the Islay festival of music and malt. I had recently viewed the festivals information as a trip to it next year might be a possibility. When thinking about something new to try it’s always hard to pick with the wide varieties out there so the packaging on this whisky certainly helped.

Jura Prophecy is distilled in the Isle of Jura which is part of Scotland’s west coast islands. Some could consider this distillery as being part of the Islay whisky region but in my opinion and to be fair, Jura it’s a different kind of whisky and could be considered to be on its own little region. It does set itself apart from all the others.

I enjoy peated whiskies so when looking at their range of whiskies I went for their Jura Prophecy which is heavily peated and has an ABV of 46%. This one bottle came at the price of $68.00. Jura has three other whiskies in their whisky range. Those are Jura 10-year-old Origin, Jura Superstition and a Jura 16-year-old.

The Prophecy has a nice golden amber color. The smell is a combination of sweet and smoke. At first taste I got sweetness but that was very quickly followed by a smokey, peaty and finally a salty taste. As you gulp you do feel a fiery burn. It took me a couple of sips for me to finally say; yes I do enjoy this whisky.

This whisky is raw and strong. Another way I could describe it is by saying that it is stormy. If a sea storm could ever be bottled in a whisky I would venture to say that Prophecy would be that whisky. Although it took me a couple of sips to really appreciate the taste I’ve got to say that trying this whisky is well worth it. It is different and intense, but it does end beautifully. 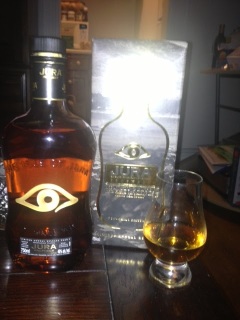